Evidence of the ancient human history of the area is still clearly visible today and looks down majestically on the town. The Bowl Barrow on Ashlet Hill dates to the Bronze Age, while the Iron Age hill forts of Bodbury Ring and Caer Caradoc keep guard on either side of the Stretton Gap.

Although the Roman Road of Botte Street (later known as Watling Street) ran very near to what are now the Strettons, the area wasn’t settled until the Saxon period. The Domesday Book of 1086 showed that there were 35 households in the manor.  By the middle of the 17th century, the population had grown to nearly 500 (men, women and children).

Most of the early buildings in the town were destroyed by a great fire in 1593, though there are some fine buildings still standing from the time of the re-building. This seems to have followed the original plan, with houses, shops and inns on both sides of the old Bristol Road, now known as High Street. St Laurence’s Church is thought to be the oldest building in the town. Although there was almost certainly a church on the site in earlier times, the Nave of the present building dates from the 12th century. Apart from the Church, the town’s oldest building is the Buck’s Head Inn on the High Street.

The Edwardian period saw the biggest growth in the town’s population, although the stimulus had started in the previous century with the coming of the railway in 1851. In the period from 1901 to 1921, the population of the three main parishes grew from around 1,750 to 2,650.

We are indebted to the Church Stretton Local History Group for this précis of the town’s history. More resources about the town can be found at their, and All Stretton’s History Society websites, as well as the library and our local bookshop, Burway Books. 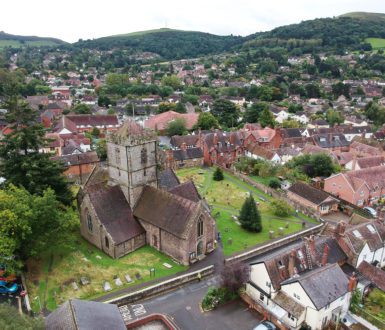 Link to All Stretton's History Society